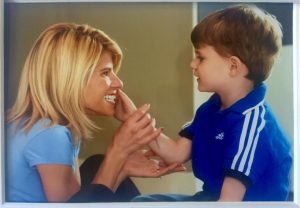 Andrew used to be quite different. He was diagnosed with Autism Spectrum Disorder at age 3-1/2. Uncommunicative, Andrew couldn’t express his discomfort, except through physical means which created a safety issue for both himself and his classmates.

Common therapies available at the time focused on treating autism as a behavioral disorder and didn’t provide a positive, nurturing therapy – putting the autism ahead of the child. Behavior is simply a symptom of the overstimulation and inability to communicate associated with autism. When Andrew was young, few therapies were available in our area, and little was understood about autism and its relationship to behavior. 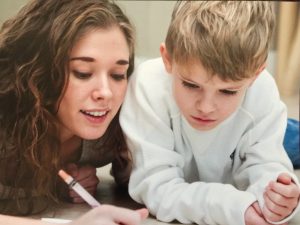 Andrew and his therapist from the Son-Rise Program

Taking Andrew out of preschool and focusing on one-to-one, intensive, full-time therapy at home, plus five years of the Son-Rise Program, biomedical therapies, Brain Balance and neurological therapies at the Carrick Brain Center, led to the breakthrough that would ultimately enable Andrew to become the boy we know and love today. The key was changing Andrew’s environment to be positive and low-stimulus so that he could grow and learn in a sensory-neutral environment, which eliminated his stress triggers. This allowed him to focus, primarily free of distraction, letting him learn better and freely, at his own pace. 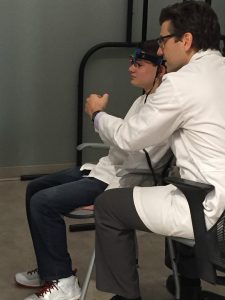 Andrew at the Carrick Brain Center

As Andrew progressed and improved, he talked about going to school, which was, at that point, a possibility. “The Plain Local School System came to the house, did assessments in his own environment, and really made me, as a mother, feel comfortable with sending him,” said Nicole. “They told me Andrew was part of the school family, and were truly willing to work with us to give him the best experience possible.”

But the overwhelming stimulus of the classroom was still too much for Andrew. From the loudspeakers, the lunchroom smells to the crowded hallways, it was very difficult for him to be able to get through the day on his own. Realizing that Andrew and other children with autism needed a space designed for them, Nicole took all that she learned from Andrew’s therapy and conceptualized the first Star Room. Making that a reality was a whole different thing. Autism affects the entire family, and seeing his mother’s efforts, Andrew’s older brother, Paul Jr., began working on the project as well.

A Message From Andrew

I love to go to school. Sometimes I feel stressed because it it too loud. It is crowded in the hall. It is crowded at lunch. It is loud at lunch too. Recess is loud too. The Star Room helps me calm down. I work out there and I feel good. It helps me be happy. I like when we take friend to play games. I like to go after I do a lot of work in class or when I need a minute to relax. Then I can go back to class and have an awesome day.